Throwing Out the Dead Flowers 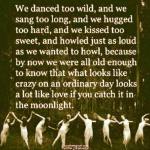 I just now finally threw out the floral arrangements left over from John’s Celebration of Life here at the house…. I hadn’t moved them in the past 2.5 months; they just sat where they’d been placed and slowly dried up into dead, lifeless stalks.

Occasionally, in the intervening weeks, a leaf had fallen to the floor and was placed softly in the trash.  Once when I bumped up against a vase of what had been a stunning bouquet of lilies from his ex-wife, a cascade of old petals had rustled their way down, scattering on the floor below while my husband’s high school photo continued to smile at me.  I left those lily petals on the floor for at least a week before sweeping them away.  It seemed wrong somehow, as though I was sweeping him away.

I’m not really sure why I got rid of the dead things today.  It’s not that I had any sense of it being the “right” time… on the contrary, I worked myself into a minor fit of irritation, which was probably some kind of false courage.  And apologized to my husband for what seemed like moving one step further away from him.

Grief is such a strange, horrible sensation. John was never in those flowers, dead or alive. They arrived two weeks after he died. He didn’t have a say in them, he didn’t pick them out for me, and he never saw them. Yet, they somehow felt like a connection.

But then, everything is.

He said I was the first girl he had ever loved, and I would be the last.

That was a promise he kept.

For more information about The Warrior Project, please click on the picture or link, or go to https://warrior-project.org.

The Warrior Project will eventually become a warm, welcoming drop-in center for those living with extreme emotional and/or physical pain coupled with hopelessness, and a resource for families and friends fearing for the life of, or grieving the loss of, the person they love so much.

We are accepting blogs and articles written on topics relevant to suicide, hopelessness, grief, and similar topics.  Please contact Linda at LSnyder@regroupbiz.com or warriorprojectmaine@gmail.com.

My Johnny was a true warrior, fighting demons no one else could see.  I thought he was the strongest man in the world, and perhaps he was, but tragically, the demons got the better of him.

The name of this project is in no way intended to be reflective of, or piggy back off, Wounded Warriors which serves those wounded after September 11, 20o1.  Like too many others, John was a warrior long before then.

We now have a group on Facebook to help find resources, support and ideas for getting The Warrior Project off the ground.  You can find us there at https://www.facebook.com/groups/thewarriorproject/

The Warrior Project is NOT an emergency program or service.

In the event of a crisis, please call 911

John and I owned both a small antiques shop and a used bookstore in Lewiston, Maine. After John died, I didn’t know what I wanted to do with the two shops – they take up a huge amount of time, and weren’t yet covering their own costs.  After John died in October of 2016, the shops were barely open during the critical holiday sales season; I couldn’t stand being in them because we had such dreams for the future.

But Johnny loved his little bookstore (Heritage Books, Maps & Ephemera) and the goal was that he would one day “retire” into running the two shops.  So I’ve committed to keeping them open, although Heritage Collectibles is now Heritage Collectibles, Books & Maps as I’ve combined those two businesses, and I’m opening Papa’s Thrift Shop for the inventory that doesn’t really work in the main store.  (Papa is what John’s grandchildren called him.)

All of the profits from those two businesses (after expenses, of course!) will go to support The Warrior Project.  If you are so inclined, please consider checking out our shops, knowing that your purchase will help fund this critically needed suicide prevention drop in center.

This entry was posted in Grief and tagged dead flowers, Grief, husband, sadness. Bookmark the permalink.